My arrival in Barranquilla had been somewhat nerve-wracking. However, after going out and drinking far more than would be advisable, even under normal conditions, I woke up safe and sound in my bed in the morning. My first night could only be described as loose. Not only did we finish two bottles of whisky between us but we met up Lupita (José’s sister and JD’s cousin) who was with a dance troupe from Miami who had all come back to Colombia for Carnaval. The night culminated in an overloaded taxi ride back to Marelbi’s house accompanied by the dance troupe in a “party ute”. Here we proceeded to dance in the street until about 5:30am. As it turns out, that night did a great deal for my confidence in the situation I was in, and afterwards, I never felt even the slightest bit of unease for the remainder of the trip. 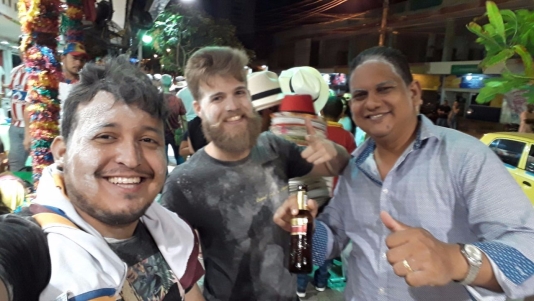 When the drinking hit the street 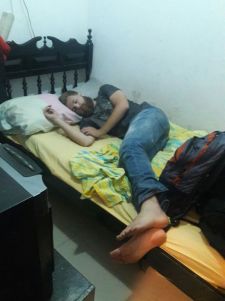 Thankfully someone took my shoes off for me.
The area I was staying in, while certainly not affluent, was not poor either. The houses predominantly consisted of two-story buildings with tall wrought iron fences out the front. Many of the homes have two families living in them. One upstairs and the other downstairs; however, in Marelbi’s building she had her own beauty salon downstairs. When I woke up to have a shower, I was in for a rude shock, where I expected two taps, there was only one. No hot or even luke-warm showers were to be had in Barranquilla. Thankfully, the climate there is tropical and warm, so the cold showers are actually quite refreshing.

The iron fences which are on most buildings

The view from JD’s place in the evening
For the rest of the day, we ran some errands and then went out to get Colombian style hot dogs with José, Luz Dary (JD’s sister) and Vanessa (José’s girlfriend). I ordered the Challenger super special and wasn’t disappointed; however, it wasn’t much of a challenge to polish off (it might surprise a few people, but I wasn’t the last to finish eating either!). Once dinner was finished, we met up with one of JD’s friends Mayra and head out to a club. Once again the trip was conducted in an overloaded taxi this time with 6 passengers. Our record for the week was 10 people in a 5 seater car; 3 in the front and 7 in the back. Once we reached our destination, we found that the entire place was swamped with people and there was Buckley’s chance of us getting in. So we went on a bit of a walk and met up with the old Miami dance troupe again and head off to find another pub.

In the square near the Cathedral

Challenger Extra special
Once at the pub, Luz Dary started my Latin dance education. Now, I would have considered myself to be a reasonably coordinated individual, but boy did I suck at this dancing. To make matters worse, no two consecutive songs are ever the same style of dancing. From what I could gather, they rotated through: bachata, merengue, salsa, champeta, reggaeton and maybe more that I can’t remember. Now, each of these styles operates on different step timings, and everyone seems to know which style each song is within seconds of it starting. I, however, took at least 30 seconds every time to try and decipher which dance I was meant to be doing and that was usually more from me looking at what people were already doing. Once I knew what timing I was meant to be using, the best I could manage was a simple left and right or forwards and backwards movement. Attempting to add any sort of flair or additional actions inevitably led to everything falling apart. Despite this, neither Luz nor Mayra gave up on trying to teach me or got too frustrated with my incompetence. At around 4am we all got some chuzos and head home for a few hours sleep before the parade started the next day.

Luz, Mayra and I enjoying some well earned chuzos
In the morning, after about 3 hours sleep a cold shower and some tinto (black coffee with enough sugar to make it palatable), I made my way to JD’s place where I met some more of his friends, Wendy and Diego and we all head off to watch the Battle of Flowers parade. There was a massive police presence at the event, and everyone had to pass through a security checkpoint to get in, which included a pat down. Police visibility is much higher in Colombia than in Australia; I am not sure if that is due to higher numbers or the fact that they are more often out on the streets. As we were trying to do things on the cheap, we all got road passes, no sitting up in one of the palcos. Of the whole time I was in Barranquilla, this was the hottest day by far, there wasn’t a great deal of shade if you wanted to be able to see anything and I was really regretting not having a hat with me. Aside from the oppressive conditions, the parade was absolutely fantastic, and I have nothing but pure admiration for the fortitude of anyone who danced along the whole procession in that heat; standing and watching was hard enough!

Me and my brother

One of the many beautiful dancers

Did someone say battle? 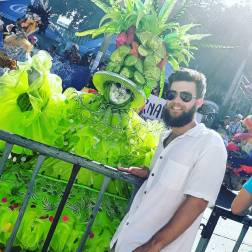 A crest made purely of flowers

JD didnt get the memo about bringing your shades

After the parade was over, we headed back home for a shower and to get ready to go out again. JD and José were going to a concert which I wasn’t able to get tickets to that night, so I was going out with the rest of the gang. We ended up trying to get to La Troja, but the roads were LITERALLY packed with people. In the end, we found another one of JD’S friends, Zamara, and settled for dancing in the street with thousands of other people around a car which, I am sure, the sound system cost more than the car itself. After a few hours, at about 1am, the police arrived to shut it down. In what I am led to believe is true Barranquilla style, the car drove about 40m and around the corner and the party continued until 5am when the police arrived to “properly” shut it down. Thankfully, during the time that the party was running, I got the chance to redeem my poor dancing by showing the guys the Melbourne Shuffle to some club bangers. It was rather amusing for the shoe to be on the other foot for once, but my time to shine was very short lived.

Ready to head out

Somewhere around the 4am mark
The next night saw much of the same revelry but at a pub, this time, and in short, involved copious amounts of water, maizena and whisky. The end result was that JD and I needed to carry a Dutch girl up five flights of stairs to get her home safely. The last night of Carnaval was one to remember. After a lot of toing and froing, we ended up in a party at La Troja (it’s a great place) again. I was somewhat surprised when it finished at 3am, which hadn’t been the general premise set thus far. When we were waiting for a taxi outside, we met a bloke called Ivan and his sister. He invited the lot of us back to his apartment for a kick on. This was another one of those situations where conventional wisdom dictated that it was probably a bad idea, but in the end, we all piled into a couple of taxis and head off to his place. Along the way, Ivan picked up a 2L bottle of Aguardiente, which I didn’t even know existed. His apartment was on the North side of town and definitely a beautiful place. I’m not sure how much of a dent we made in the bottle, but JD, Luz, Mayra and I were treated to an exquisite view of the sunrise to round out Carnaval.

Enough said
There are a few things that I would remark on about my experience during Carnaval. Firstly, it is an excellent experience, and I would strongly suggest that anyone who is considering attending, just do it! Secondly, the drinking and drug culture over here is entirely different to Australia, and I imagine, the rest of western society. The only time I saw anyone with or using drugs was when we ran into a group of German backpackers, and I wasn’t swarmed with people asking me if I wanted any either. When it comes to drinking, Colombians do it differently. The idea of binge drinking isn’t something that seems to resonate with them. They love to party, but for a long time. They generally drink in moderation through the whole night because they love to dance not be paralytic in a gutter ( a lot of Australians could learn from this). The last thing would be that I feel like the culture of dance here is something really healthy. Again in contrast to Australia, if you go and ask someone to dance here far more often than not, they will happily oblige you. It is not the daunting task that it is in Australia where more often then not you will get told to jog on. It is more than just the fact that people are happy to dance with anyone, though. I believe that the type of dancing that occurs here provides a healthy form of platonic touch between men and women; something which is sadly lacking in western society, where many people have become to scared to touch each other. Ultimately, I think there is a lot that Australian’s could stand to learn from the Colombian way.